DOHA, QATAR (February 12, 2016) — On back-to-back weeks, Qatar first played host to a world-class women’s field and next to a world-class men’s field in the women and men’s editions of the Tour of Qatar. I caught the action at the final stages of both races, along with the second stage of the men’s race. 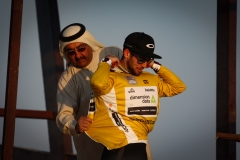 The final stage of the 2016 Tour of Qatar wrapped up along the Doha Corniche. After retaining the leader’s jersey at Tuesday’s second stage at The Pearl, British cyclist Mark Cavendish had to surrender it to his teammate, Norwegian rider Edvald Boasson Hagen, after Wednesday’s time trial. But Cavendish regained the jersey on Thursday after a punctured tire only 10 km from the finish line cost Boasson Hagen precious time.

With the gold jersey on his shoulders going into another windy stage on Friday, Cavendish was escorted by his chief lieutenant Mark Renshaw as the peloton worked to reel in a three-man breakaway consisting of Tim Declercq, Jesse Sergent, and Steven Tronet. The break had gained as much as two minutes 25 seconds before the peloton got to work and closed the gap to the trio with only two circuits of the Doha Corniche remaining.

In final mass sprint, Norwegian sprinter Alexander Kristoff edged out Cavendish at the line for his third stage win of this Tour. Cavendish (Dimension Data) took the overall title with Kristoff (Katusha) only 5 seconds back in the runner-up position and Belgian rider Greg Van Avermaet (BMC) only eight seconds back in third. USA-based BMC Racing Team won the team competition.

After winning the first stage, Mark Cavendish wore the leader’s jersey and held an eight second margin in the standings. Despite a few breakaways and splits in the peloton as cyclists battled a brutal wind, everything came together for a mass sprint at the end. Norwegian sprinter Alexander Kristoff edged out Cavendish for the stage win, but Cavendish retained his overall lead in the weeklong stage race.

The final stage of the women’s Tour of Qatar began at Aspire Zone and culminated with 11 laps along the Doha Corniche. American Coryn Rivera, riding for United Healthcare, made a solo breakaway at the 36-kilometer mark. Rivera’s break extended to one minute 20 seconds over the peloton, with two pursuers just 30 seconds back. But with six kilometers to go, the peloton bridged the gap to catch Rivera and set up a mass sprint for the finale. Australia’s Chloe Hosking beat out Kirsten Wild and Monique Van Der Ree for the stage win. German Trixi Worrack maintained her lead in the general classification standings to claim the overall title.