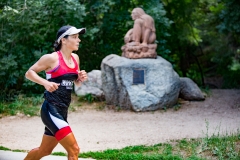 Cloud cover blanketed the Boulder Reservoir during the early morning hours for the swim, but the sun soon appeared as athletes got onto the bike course. The race provides a unique racing experience with the bike-to-run transition on the Boulder High School track and the entire run taking place along the Boulder Creek bike path. Racers finish directly in front of the tea house on 13th Street.

Condolences to the family and friends of the competitor that died during a tragic accident on the bike course.