KATHMANDU, NEPAL (June 3, 2016) — I always intended to visit the Himalayas and my opportunity finally came this May. The impetus was the Tenzing Hillary Everest Marathon, an event that takes place every year on May 29th to mark the anniversary of the first ascent of Mount Everest by Tenzing Norgay Sherpa and Edmund Hillary. 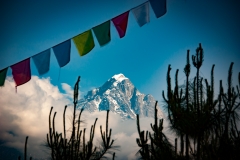 The majestic Ngothung Ri Peak viewed from the Lukla airport

As the world’s highest peak, Mount Everest (29,029 feet / 8,848 meters)—known as Sagarmāthā in Nepal and Chomolungma in Tibet—is but one of numerous 8,000-meter peaks in the region. Since the first ascent of Everest by Tenzing and Hillary, well over 3,000 individuals have summited the mountain. Reinhold Messner and Peter Habeler were the first to climb Everest without supplemental oxygen on May 8, 1978. Messner then went on to do a solo climb without oxygen in 1980. The mountain has seen its share of controversy and tragedy over the decades since Tenzing and Hillary’s first ascent, but its special beauty and power remains. 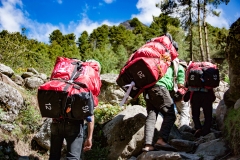 Billed as the “world’s highest marathon,” the Tenzing Hillary Everest Marathon begins at Everest Base Camp (17,592 feet) and finishes in the bustling mountain village of Namche Bazar (11,614 feet). Although “mostly downhill” with an elevation loss of about 9,000 feet, the course involves its share of climbing with about 3,400 feet of elevation gain—including one long climb of 1,7000 feet.

My interest in the marathon had less to do with “racing” the course than with the ready-made opportunity it provided to explore the mountains of Nepal while getting in some trail running. I signed up for a three-week trip put together by the marathon organizers; and, with all the logistics taken care of, all I had to do was show up in Kathmandu with my gear ready to go. 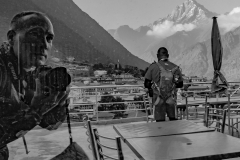 After an organizational and sightseeing day in Kathmandu, we spent a few weeks slowly trekking up to Base Case to acclimatize to the altitude. Although I was feeling good and got in a short trail run a few days into the trek to reconnect with my running legs at altitude, I soon succumbed to several days of diarrhea that zapped my energy. Once I recovered from that, I then caught a head cold that worked its way to my chest by the time we reached Base Camp. Trekking at altitude and running in the mountains are one thing, but I discovered firsthand the added dimensions of these pursuits in this part of the world. Staying healthy and avoiding the dreaded traveling illnesses that accompany forays into Nepal is easier said than done. That challenge, along with the acclimatization trek to Everest Base Camp, makes getting to the starting line of this marathon more challenging than the actual race.

Marathon runners had the unique experience of spending two nights at Base Camp in the lead-up to race day, another benefit of the organized event. The only others allowed to camp at Base Camp are those with permits to climb Everest. Base Camp is set up on the ice and rocks of the Khumbu Glacier, making it a unique world unto itself.

In addition to all the trekking and running, along the way I had the opportunity to meet an incredible array of people from around the world and experience the culture of the region.