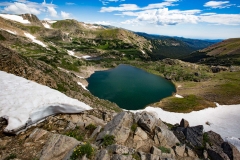 BOULDER, COLORADO (August 8, 2016) — With thoughtful foresight, the Indian Peaks Wilderness was created in 1978 to protect the area between Rocky Mountain National Park to the north and Rollins Pass to the south. Living in Boulder most of my life, I’ve always considered the Indian Peaks as part of my “backyard” and have accumulated many unforgettable memories while exploring its trails and mountains along and below the Continental Divide.

The naming scheme for the peaks was devised by Ellsworth Bethel, a botany teacher, in 1914. According to Wikipedia, “By 1914, few of the peaks between Longs Peak and the Arapaho Peaks had names. In the spring of that year Bethel, inspired by the established name of the Arapaho Peaks, settled on 11 [Native American] tribal names for various summits along the Divide. The United States Board on Geographic Names kept 6 of his names: Apache Peak, Arikaree Peak, Kiowa Peak, Navajo Peak, Ogalalla Peak and Pawnee Peak. He later added Paiute Peak… Other names, including Shoshoni Peak, Hiamovi Mountain, Satanta Peak and Watanga Mountain were added later.”

Within the Indian Peaks Wilderness lies the City of Boulder watershed, which includes Arapaho Glacier and several peaks that are off limits hikers and climbers. But there are still plenty of peaks to climb and terrain to explore throughout the wilderness area, which is home to 35 named peaks. Of those peaks, 32 have elevations over 11,000 feet, 23 over 12,000 feet, and 7 over 13,000 feet. The three highest peaks are North Arapaho Peak (13,502 ft), Apache Peak (13,441 ft), and Navajo Peak (13,409 ft), with South Arapaho Peak (13,397 ft) close behind.